The government’s ability to grow the economy and improve the wellbeing of Queenslanders is supported by a prudent fiscal strategy. A cornerstone of each year’s Queensland Budget, it outlines the principles by which the government manages Queensland’s finances.

In 2018, the government engaged Professor Peter Coaldrake to review how public sector workforce data is collected and reported and to assess the skills required for the future workforce. The government has accepted, or accepted in principle, all of the review’s recommendations.

One of the recommendations from Professor Coaldrake’s review was to ‘nuance’, or provide further detail about, the representation of Fiscal Principle 6.

In the 2019–20 Queensland Budget, Treasury used expanded full-time equivalent data to show health and education growth separately from the rest of the public sector.

Treasury is working with central agencies to implement the recommendations, which include adopting a single workforce database; replacing quarterly Workforce Profile Reports with half-yearly reports covering sector-wide analysis and trends; and adopting a consistent approach to reporting and monitoring of the ‘indirect’ workforce (i.e. contractors and consultants).

Underpinning Treasury’s commitment to the fiscal principles and to the government’s priorities are strong corporate governance practices in:

Decisions in these areas are made by our Executive Leadership Team.

Treasury’s performance is managed in line with the Queensland Government’s Performance Management Framework, which provides the means to:

This is translated into financial year objectives and performance measures for each service area through our Service Delivery Statement, and reported in the annual report. Read more in the service reports.

Treasury’s performance is monitored externally through the Parliamentary Estimates Committee process after each year’s Queensland Budget. Treasury is accountable to the Deputy Premier, Treasurer, and Minister for Aboriginal and Torres Strait Islander Partnerships, who reports against the Service Delivery Statement through this process.

The operational plans are updated annually, but can be amended at any time to reflect emerging risks, opportunities and priorities. These plans provide a foundation for managers and employees to agree on priority deliverables which are tracked in individual Performance Excellence Plans. This planning framework provides alignment between the government’s priorities, Treasury’s vision, and its employees’ day-to-day work.

Create jobs in a strong economy

Continued partnering in the Business Development Fund, which in 2018–19 invested $28 million in innovative Queensland businesses and secured a further $39 million in co-investment.

Supported job creation in Maryborough, the Western Downs and Gympie with the Jobs and Regional Growth Fund.

Supported the Queensland Productivity Commission Inquiry into Imprisonment and Recidivism, to reduce those factors and improve outcomes for communities.

Be a responsive government

Appointed Under Treasurer in February 2019, Frankie Carroll has more than 30 years’ experience in both the public and private sectors.

Before joining Queensland Treasury, he was Director-General of the Department of Infrastructure, Local Government and Planning between 2015 and 2018.

Previously, Frankie was Chief Executive Officer of the Queensland Reconstruction Authority (QRA), responsible for delivering a reconstruction program worth more than $13 billion – the largest program of its type in the nation’s history. He earlier held the position of Deputy Chief Executive and Chief Financial Officer of the QRA, commencing in 2011.

Before joining the public service in Queensland he worked for many years both in Australia and internationally in the financial services sector.

Maryanne commenced as Acting Deputy Under Treasurer of the Agency Performance group in December 2017.

In her current role, Maryanne is responsible for providing advice and analysis on public policy, fiscal and economic issues, particularly in relation to the health, education, communities, justice and housing portfolios.

Prior to her current appointment, Maryanne was the Assistant Under Treasurer for Queensland Treasury’s Economics Strategy division. In this role, she was responsible for the employment and economic policy including overseeing the implementation of the government’s Back to Work program and the production of Budget forecasts and the Budget Economic Framework.

Maryanne has more than 20 years of experience in leadership roles in the Queensland, Australian and United Kingdom governments.

She has a Bachelor of Commerce and a Master of Social Planning and Development from The University of Queensland. In 2014, Maryanne completed a Graduate Diploma of Business with a major in accounting.

Alison was appointed Deputy Under Treasurer of the Economics and Fiscal Coordination group in September 2017.

More recently, Alison has been in a senior executive management role working closely with Treasury’s partner agencies to develop, fund and implement public policy, and has been involved in the development of the State Budget since 2013–14.

During her 20 years in government, Alison has held key roles in the development and implementation of the government’s budget and reporting system, and its financial accountability framework.

She has been responsible for providing advice to government and agencies on financial management matters and complex commercial transactions.

Alison is a Chartered Accountant who started her career in the private sector, initially working in the business and tax advisory services industry followed by several years in commercial banking, before joining government in 1998 with the Department of Education. She joined Queensland Treasury during the period the government was transitioning to accrual-based budgeting.

Drew was appointed Acting Deputy Under Treasurer of the Agency Performance and Investment group in September 2018.

In this role, Drew is responsible for commercial, fiscal and economic advice on the state’s economic portfolios and Treasury’s investment policy and industry programs.

Prior to this appointment, Drew was an Assistant Under Treasurer within the Agency Performance group.

In this role, Drew had responsibility for providing fiscal and policy advice across a range of portfolio areas including Transport, Tourism, Environment and Science and State Development. His responsibilities also included management of the government’s banking and other financial services contracts.

Drew holds a Bachelor of Economics from The University of Queensland and is a graduate of the Australian Institute of Company Directors.

Liz was appointed Commissioner of the Office of State Revenue (OSR) in February 2014. Prior to her appointment, Liz was Senior Assistant Commissioner, Indirect Tax at the Australian Taxation Office (ATO) in Brisbane, and has held senior and executive management and leadership roles in tax administration since 1997.

Liz has international tax experience with the Organisation for Economic Cooperation and Development (OECD) in Paris. She previously worked in the Office of State Revenue from 1997 to 2001, where she had a leading role in rewriting the state duties legislation.

She began her career as a graduate with the ATO in 1984.

After a distinguished career in taxation and revenue management, Liz will retire from Queensland Treasury in July 2019.

He worked in a number of budget portfolio roles until his appointment as Treasury’s Director of Finance in 1995. He then headed up Treasury’s corporate services function as Assistant Under Treasurer until 2001, and followed this with various roles including Assistant Under Treasurer, Budget Division and Executive Director of the Office of Government- Owned Corporations.

In 2007, Geoff started his own business and consulted to state and local governments in Queensland. He returned to Treasury in 2012 and worked on several internal reviews before heading up the Office of the Under Treasurer and leading Corporate Group. In 2019, when Treasury’s corporate functions were combined into one business group, Geoff assumed responsibility for this expanded portfolio.

As part of his broader responsibilities, Geoff has statutory appointments as the Independent Board Member on the Public Safety Business Agency Board of Management, and as the Government Superannuation Officer.

Robert is an economist with a background in government policy and project management within a career built in the public sector. He began his career in policy and budget development, working predominantly in social justice and transport portfolios.

During his 20 years in government, Robert has been responsible for providing advice for some of the state’s largest infrastructure projects in roles at both the Queensland Treasury Corporation and Queensland Treasury. He has led teams that have developed business cases and procured key infrastructure projects including the Toowoomba Second Range Crossing, Herston Quarter redevelopment, Gold Coast Light Rail, Cross River Rail, and market-led proposals such as the Logan Motorway Enhancement Project. 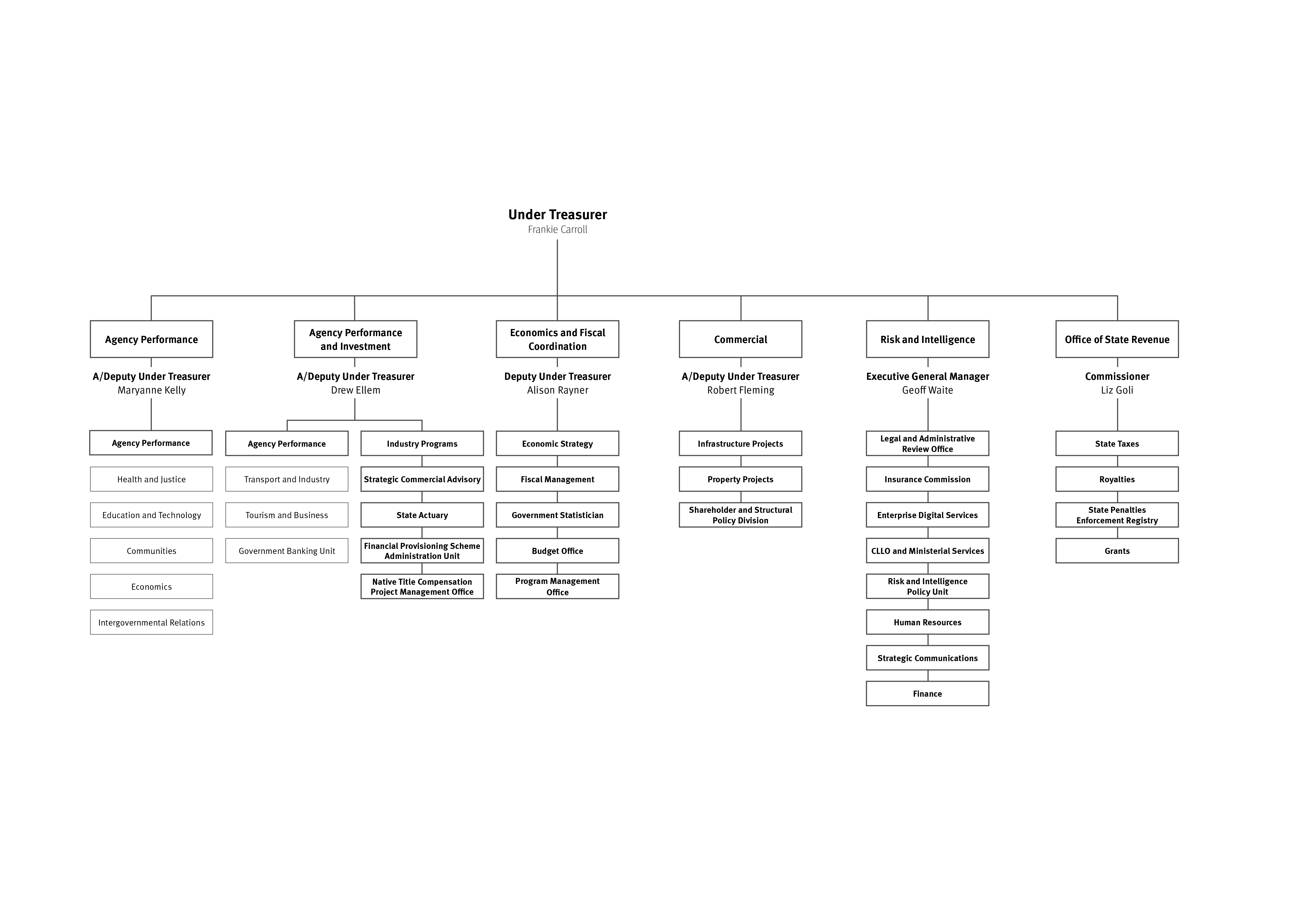 The Audit and Risk Management Committee helps Under Treasurer Frankie Carroll to meet his responsibilities under the Financial Accountability Act 2009, the Financial and Performance Management Standard 2019 and other prescribed requirements. It does this by carrying out a range of activities to maintain oversight of key financial, risk and performance management activities for our organisation, including:

The committee also performs these functions for select related entities who sit within Treasury’s broader portfolio but prepare independent financial statements. In 2018–19 these entities were the Motor Accident Insurance Commission and the Nominal Defendant.

In 2018–19, the committee met five times and fulfilled its responsibilities in accordance with its charter and an approved work plan, which included:

Everyone in Treasury is responsible for managing risk, and a robust risk management framework is integrated into all Treasury business activities and systems.

This report is presented to the Executive Leadership Team and provides a snapshot of risks across business areas, risk-rating changes and an overview of current and emerging risks and opportunities for the agency. This risk profile is used to inform strategic and business planning, and the targeting of relevant assurance activity.

Internal Audit is an integral part of the corporate governance framework Treasury uses to maintain accountability and control at all levels.

PwC provides an independent and objective internal audit service in accordance with our Internal Audit Charter and ethical standards. Although independent, Internal Audit regularly liaises with QAO to ensure appropriate assurance services are provided to Treasury. In 2018–19, Internal Audit delivered a program of work for Treasury’s three-year Internal Audit Plan (approved by the Audit and Risk Management Committee). This plan is aligned to our key risk areas, operations, and strategic objectives and draws on additional specialist expertise as needed.

Treasury continues its commitment to quality information and records management by providing:

The department strives to meet the challenge of evolving technologies, the rise of large, complex data sets and its obligations under the Public Records Act 2002, the Financial and Performance Management Standard 2019 and the whole-of-government record governance policy and guidelines.